Sergei Perestoronin, the minister of Industry and Science of the Sverdlovsk region visited the VMP plant to get acquainted with the possibilities of modern production of industrial protective coatings and metal powders.

The Minister was demonstrated a research and production complex with a developed infrastructure, implemented innovations and own developments. The tour of the company was held by the President of the VMP holding Mikhail Vakhrushev. Close attention was paid to the scientific center, a new workshop of paints, and the production of metal powders. 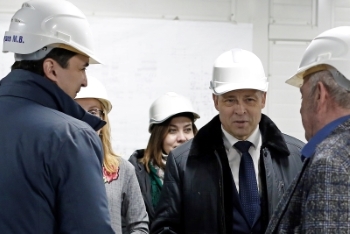 Following the visit, the Minister noted the uniqueness of the VMP company and its development history. He praised the culture of production, automation and product quality. He thanked VMP for his contribution to the development of industry, and wished the company further growth, development and enlargement of the use of materials.

The plant's project took the III place in the Russian Professional Competition NOPRIZ for the best innovative project in the nomination “The Best Project for an Industrial Object”. 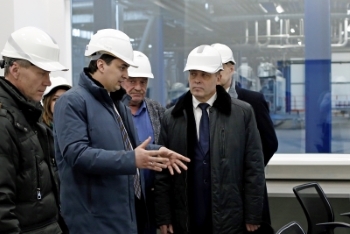 The President of the VMP was awarded the Prize of the Ural Chamber of Commerce and the Sverdlovsk Regional Union of Industrialists and Entrepreneurs, as well as the title “Industrialist No. 1” for high numbers and social contribution of the company.

VMP production capacity exceeds 20 000 tons of paints and varnishes per year. During the work more than 80 million square meters of the largest objects were painted, more than 2500 enterprises became regular customers.